To understand the need for creating a class, consider the following scenario: suppose you wanted to trace the number of fishes with different attributes such as breed and color. If you use a list, the first element could be the fish’s breed, and the second element could be its color.

How would you know which element is supposed to be which if there are 5000 different fishes? What if you wanted to give these fishes additional characteristics? This is disorganized, which is exactly what classes require.

Class is a user-defined prototype from which objects are created, and it serves as a container for data and functionality. Creating a new class creates a new type of object, allowing for the creation of new instances of that type. An instance of a class can be created and used to access and use the user-defined data structure that it creates, holding its own data members and member functions.

The syntax for Class:

Objects are instances of a specific class. Every other element in Python, such as string, dictionary, number(10,40), and so on, will be an object of some class. Objects are different versions of the class that contain some actual values.

An object is made up of 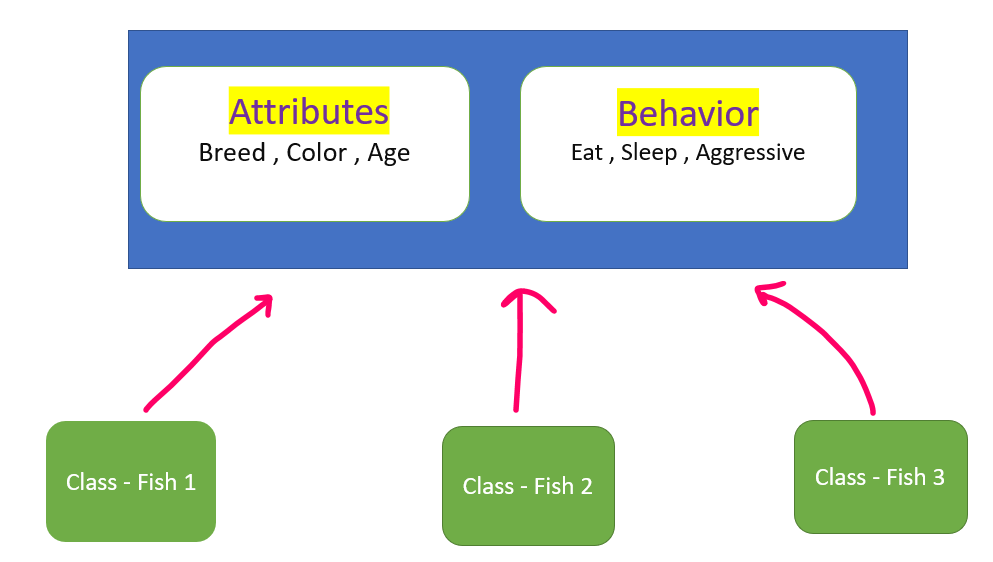 Every time a new object is created from any class, the init method is called. The init method is similar to constructors in other programming languages (such as C++ and Java). This type of method contains statements that will be executed during run time (time of object creation). This method is denoted by a double underscore ( ).

The self parameter is a reference to the current instance of the class and is used to access variables that belong to the class.

Output: The name of the fish is Nemo

An example of Python code that uses Classes, objects, self, and init

Special thanks to Shreyas Vishwakarma for contributing to this article on takeUforward. If you also wish to share your knowledge with the takeUforward fam, please check out this article