In this article, we are going to study the different ways of representing a graph in memory, but before that first, let us understand how to take the input of the graph.

After understanding the input format, let us try to understand how the graph can be stored. The two most commonly used representations for graphs are

Consider the example of the following undirected graph,

We need to store these edges so that future algorithms can be performed. Are the nodes zero-based or one-based? In this case, the nodes follow one-based indexing as the last node is 5 and the total number of nodes is also 5. Now, define an adjacency matrix of size (n+1) x (n+1), i.e., adj[n+1][n+1]. If there is an edge between 1 and 2, mark 1 at (1,2) and (2,1) as there is an edge between 2 and 1 as well (in the case of an undirected graph). Similarly, follow for other edges.

All the edges are marked in the adjacency matrix, remaining spaces in the matrix are marked as zero or left as it is. 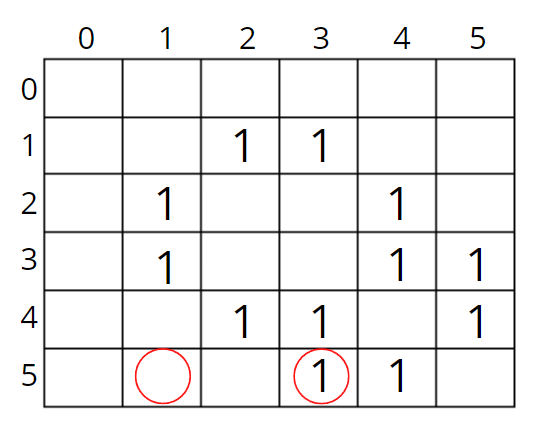 The space needed to represent a graph using its adjacency matrix is n² locations. Space complexity = (n*n), It is a costly method as n² locations are consumed.

In the previous storing method, we saw it was taking n² space to store the graph, this is where the adjacency list comes into the picture, it takes a very less amount of space.

This is a node-based representation. In this representation, we associate with each node a list of nodes adjacent to it. Normally an array is used to store the nodes. The array provides random access to the adjacency list for any particular node.
Consider the example of the following undirected graph, 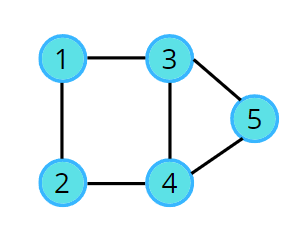 To create an adjacency list, we will create an array of size n+1 where n is the number of nodes. This array will contain a list, so in C++ list is nothing but the vector of integers.

Now every index is containing an empty vector/ list. With respect to the example, 6 indexes contain empty vectors.

In the example, we can clearly see that node 4 has nodes 2, 3, and 5 as its adjacent neighbors. So, to store its immediate neighbors in any order, we use the list.

Hence, we stored all the neighbors in the particular indexes. In this representation, for an undirected graph, each edge data appears twice. For example, nodes 1 and 2 are adjacent hence node 2 appears in the list of node 1, and node 1 appears in the list of node 2. So, the space needed to represent an undirected graph using its adjacency list is 2 x E locations, where E denotes the number of edges.

For directed graphs, if there is an edge between u and v it means the edge only goes from u to v, i.e., v is the neighbor of u, but vice versa is not true. The space needed to represent a directed graph using its adjacency list is E locations, where E denotes the number of edges, as here each edge data appears only once.

As of now, we were considering graphs with unit weight edges (i.e., if there is an edge between two nodes then the weight on the edge is unit weight ), now what if there are weights on its edges as shown in the following example?

For the adjacency matrix, it is much simpler.

But how are we going to implement it in the adjacency list?

Earlier in the adjacency list, we were storing a list of integers in each index, but for weighted graphs, we will store pairs (node, edge weight) in it.

Special thanks to Vanshika Singh Gour for contributing to this article on takeUforward. If you also wish to share your knowledge with the takeUforward fam, please check out this article. If you want to suggest any improvement/correction in this article please mail us at [email protected]