In this article, we will be discussing the LinkedList in Java and its different operations like insertion, traversal.

Now you may ask why a linked list is a primitive data type?

And my answer will see the above diagram a node in a linked list contains the 2 things or two different types of data (data and address) which cannot be made through existing data types (like int, float, string)  so we will use a group of data types to create out new datatype as a node as shown below code.

In the above class, we have created two variables (val and node) and a constructor.

The third thing present here is the constructor which will be going to assign the value to the val and next variables. Assigning value to the next is optional here because in java if no value is assigned to the member then it by default becomes null.

Now let’s see how we can create the previously mentioned linked list:

We will be going to write the following code to create a linked list:

When this line Node head = new Node(10); will get executed at that time the constructor will be called with data value 10 and this value assigned to the variable data and a new node will be created as shown below:

Above line of called at that time the following link will get created:

And finally, the following linked list will be created:

Now inside heap initially memory allocation will be going to be seen in the following fashion:

Now after following 2 lines of code (after linking):

The memory address will be going to be looked like follows

The memory can or cannot be continuous here that’s why we have shown an unordered way of memory allocation.

Another method of creating a linked list can be shown below:

Before going any further let’s see how we can display the linked list so that the above-mentioned operation could be seen in the output screen.

The following line of code will be going to be seen for displaying the linked list:

n the above code what we have done is we are traveling over the linked list and print the data associated with the node and moving ahead until null occurs. let’s take an example

This line of code has been written now with this line curr = curr. next; the curr pointer will going to be shifted one step ahead.

The new diagram will be going to look like this:

Let’s assume we didn’t have any node in the linked list so the head is pointing to null initially.

Coming to the line  Node temp = new Node(data);  this line will be creating the new node as shown,

Now the initial value of the head is null therefore temp.next = head; when this line of code executes then we get null in address storing part of the linked list and we are returning the address of the head like a current node which is temp.

This line of code helps in creating a new link between the previously created link list and the currently created node.  temp.next = head;

Let’s create a function named insertAtHead() which takes 2 parameters as data and head. Where the head is the pointer pointing to the current head from where we have to start the traversal to find the node having null in its next and the second parameter is the data.

Node temp = new Node(data);  as we know this line is going to create a new node as shown

Coming to the line   Node curr = head;  initially, we are making a new node pointing to the current head so that we could traverse the linked list to find the last node

while (curr.next != null). You will be wondering why we haven’t taken the condition of curr!=null this is because after this while loop we want that we should have a node so if the condition is curr!=null then we will not be able to get the node where we want to store the address of the newly created node.

Now as we get the access of the last node now our last work is to give the address of the newly created node to the current last node is this is done by this line of code curr.next = temp;

So that’s how this new connection was created.

3)Insert at any position:

When we insert the node at any position we use the logic that until our count of position becomes 1 we traverse the linked list and at that position, we insert the data or node into it. Now let’s make a function that accepts the 3 parameters as head, data, and pos we all know the work of pos the thing which is new to us is pos, so pos here helps us to know in which position we will be adding the element.

Let’s take an example where we will be adding an element at pos 2 and the data be 20.

As we know the first line of code will be going to create a new node, after that we have an if condition telling about which is dealing with the condition if pos is one, there may be doubt in your mind that it is possible to call the insertAtBeg()  when pos is 1 so here you can definitely use that function and similarly if pos == length of linked list at that time you can use the function of insertAtEnd(), so now discuss the remaining code.

So coming to the for loop if we want to insert the element at the 2 pos then we will be checking for the i == pos-2 this is because we have to insert at pos == 1 not pos == 0 and as soon as we meet the condition we will set the next of curr pointer to address of the curr.next 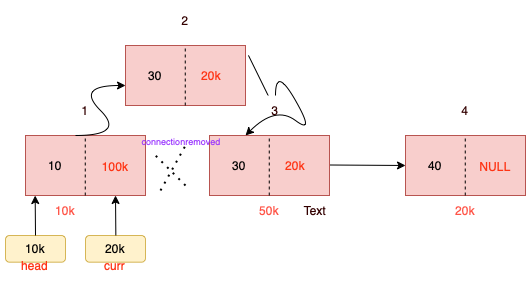 And if the condition of position is more than the size of the linked list encountered it is going to be handled by curr != null condition as the current will come first as that of pos because we will reach the end if curr == null.

Special thanks to Apoorv Joshi for contributing to this article on takeUforward. If you also wish to share your knowledge with the takeUforward fam, please check out this article