A network is a collection of two or more devices connected by communication links so that they can communicate with each other and share resources and information.

Some examples of networks are email, instant messaging, banking, etc.

Components of a Network

• Device: Device means any entity connected to a network and capable of sharing and/or receiving data. It includes devices such as PC, printers, mobile phones, etc.

• Communication link: A communication channel that connects two devices in a network. The connection can be physical through cables like copper wire, optical fiber or can be wireless like the use of radio waves.

Reasons for establishing a network:

A computer network can transmit data by two methods-

1) Point-to-Point: A dedicated communication channel or link connects 2 devices. The two connected devices use the full capacity of the channel as no other devices are connected.

Definition: Network topology tells us about the way the links and nodes/devices are connected i.e., it refers to the layout or arrangement of nodes and links in a computer network.

Now let us understand why we need network topology.

Network topology plays a key role while establishing a network, some reasons are:

It is a multipoint connection in which every node/device is connected to a single cable (Backbone cable) via drop lines.

Bus topology consists of two ends and data is transmitted from one end to another in a single direction i.e., bus topology is unidirectional. 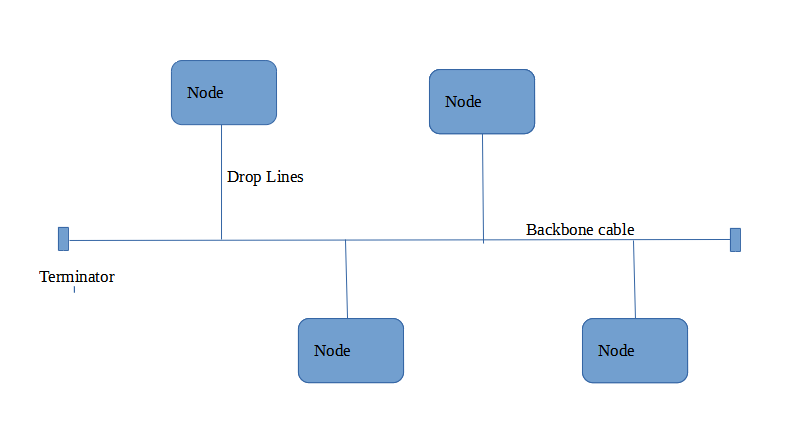 If the bus topology contains N nodes, then the number of cables required to connect them will be equal to N+1 where N is the number of drop lines and 1 for the backbone cable.

In a ring topology, all the nodes are connected to form a ring such that every node will have exactly two neighbors.

The signal is passed in one direction from one device to another device until it reaches its destination. For the signal to reach from one point to another it must travel through all the intermediate nodes.

If the ring topology contains N nodes, then the number of cables required to connect them will be equal to N.

In star topology, every device in the network is connected to a central device called hub.

If the star topology contains N nodes, then the number of cables required to connect them will be equal to N.

In mesh topology, each device is connected to every other device on the network through a dedicated point-to-point link.

So, if there are N nodes in the network then every single node is connected to N-1 number of nodes.

If the mesh topology contains N nodes, then the number of cables required to connect them will be equal to N*(N-1)/2.

Tree topology is a combination of star and bus topology. In tree topology, multiple star networks are interconnected with one another using a bus network. This topology consists of a parent-child hierarchy.

Special thanks to Ami Jangid for contributing to this article on takeUforward. If you also wish to share your knowledge with the takeUforward fam, please check out this article